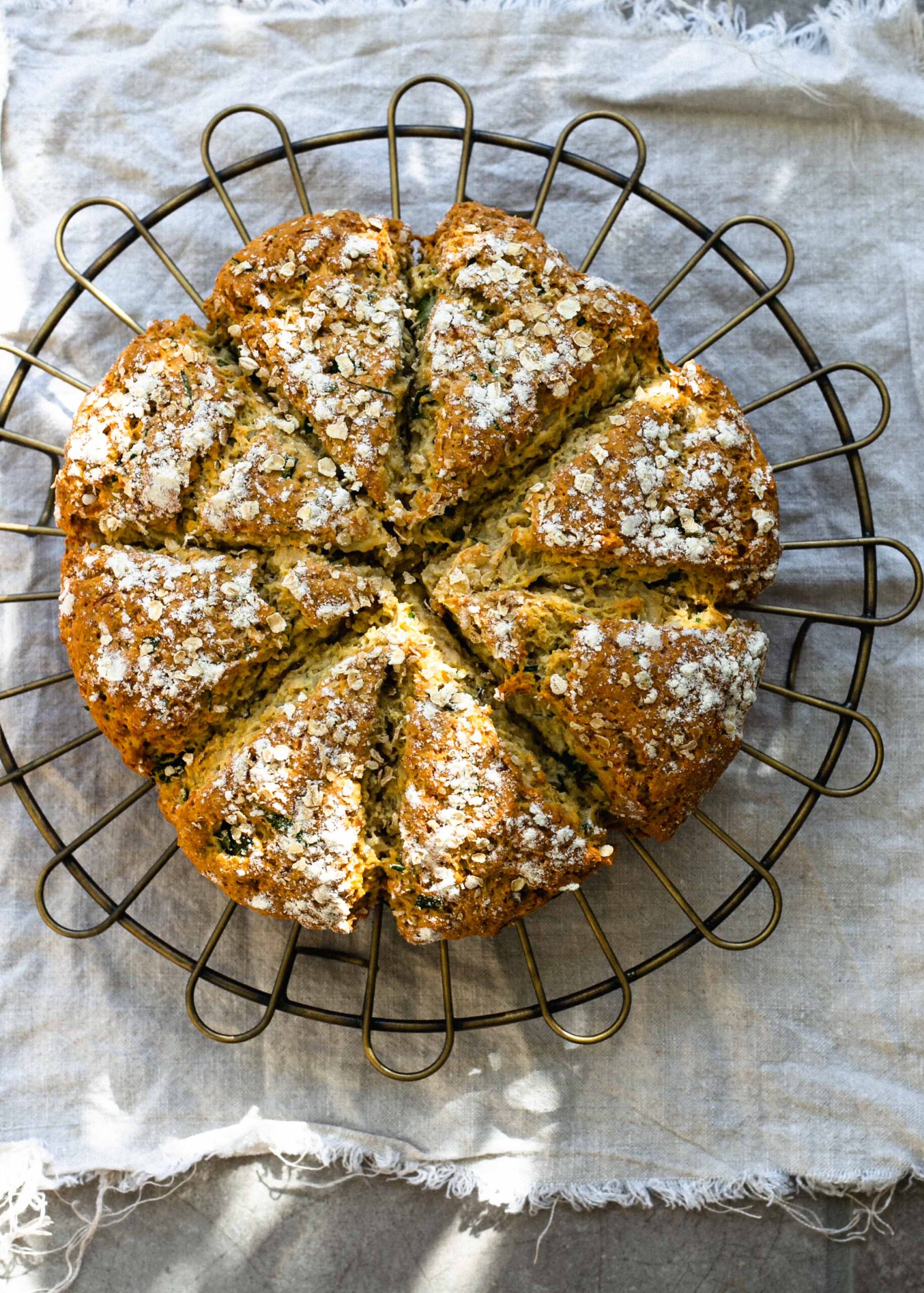 Comforting, tender, gluten-free soda bread, studded with strong cheddar cheese, green spring onion tops and onion-like chives. I hope you love this one as much as I do!

Baking gluten free bread at home can be so rewarding but it can also be time consuming, use a lot of ingredients and more often than not, call for a sourdough starter. This recipe for soda bread however, couldn’t be simpler. On the table in less than an hour, it comes together so quickly and is extra satisfying slathered in salty butter.

Oats add texture to this gluten free soda bread and prevent it from getting any kind of dusty texture, which can be a problem of gluten free flours – likewise the simple addition of just half a teaspoon of sugar helps not only to balance out the flavour but encourage the loaf to brown (something gluten free flours don’t do as well as gluten-full flours).

Leiths Cooking School add butter to their soda bread dough, as you would when making scones and trying it for this recipe, it really helped make the loaf more tender. I’ve used it in my soda bread recipes ever since. The addition of egg yolk also adds colour, richness and binding ability.

Being gluten free, this loaf was never going to rise as much as a gluten-full soda bread, so instead of trying to emulate that puffed-up, cracked look, I took inspiration from Russell Brown who presses his dough into a flatter disc from the beginning. Using a knife to slice the dough into 8 pieces rather than using a wooden spoon to press the dough into four pieces, helped with the gentle rise and final look. Last but not least, I reduced the temperature of the oven after 20 minutes, once the beautiful golden exterior is achieved, to allow the dough to cook through without burning. 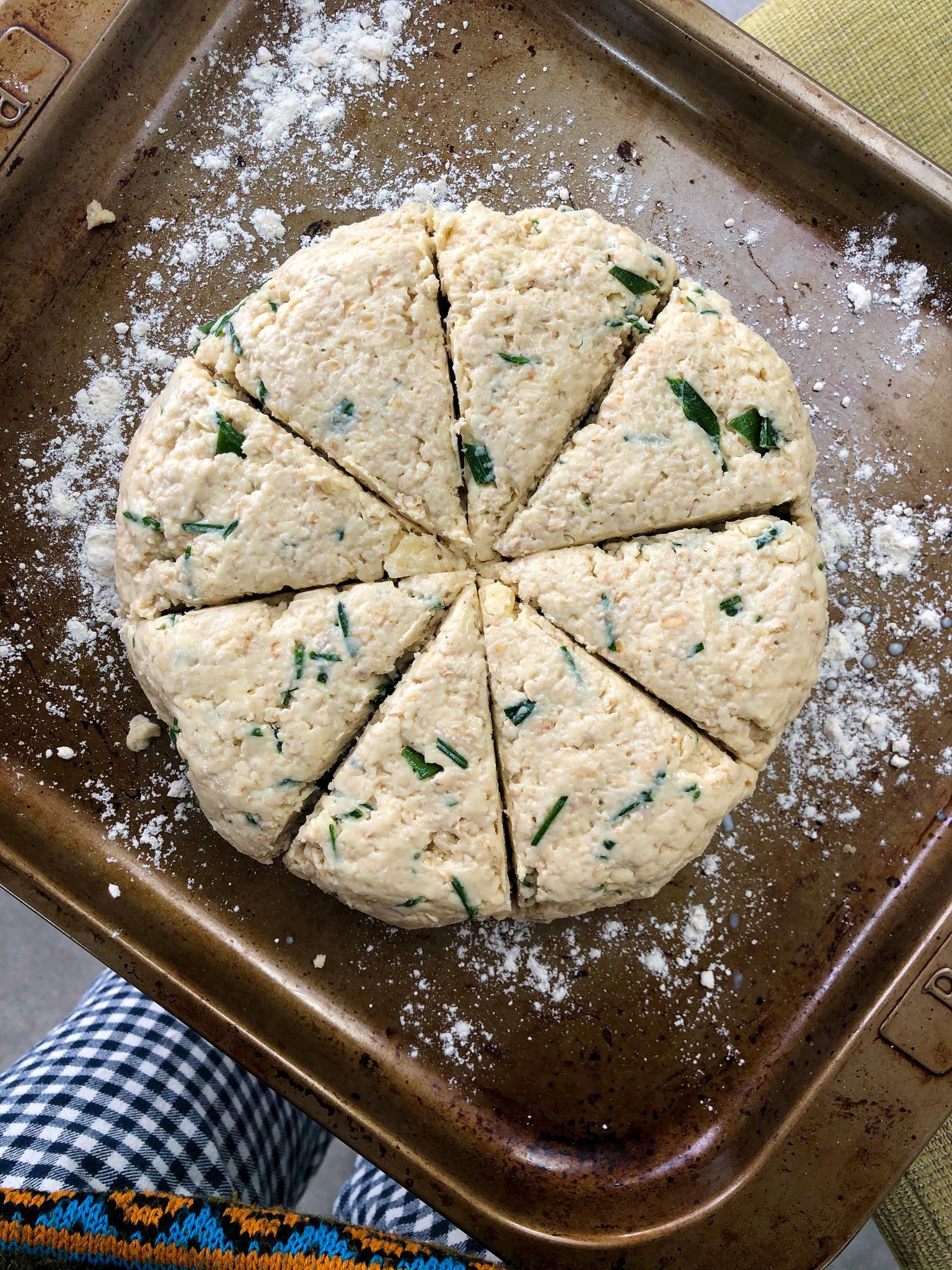 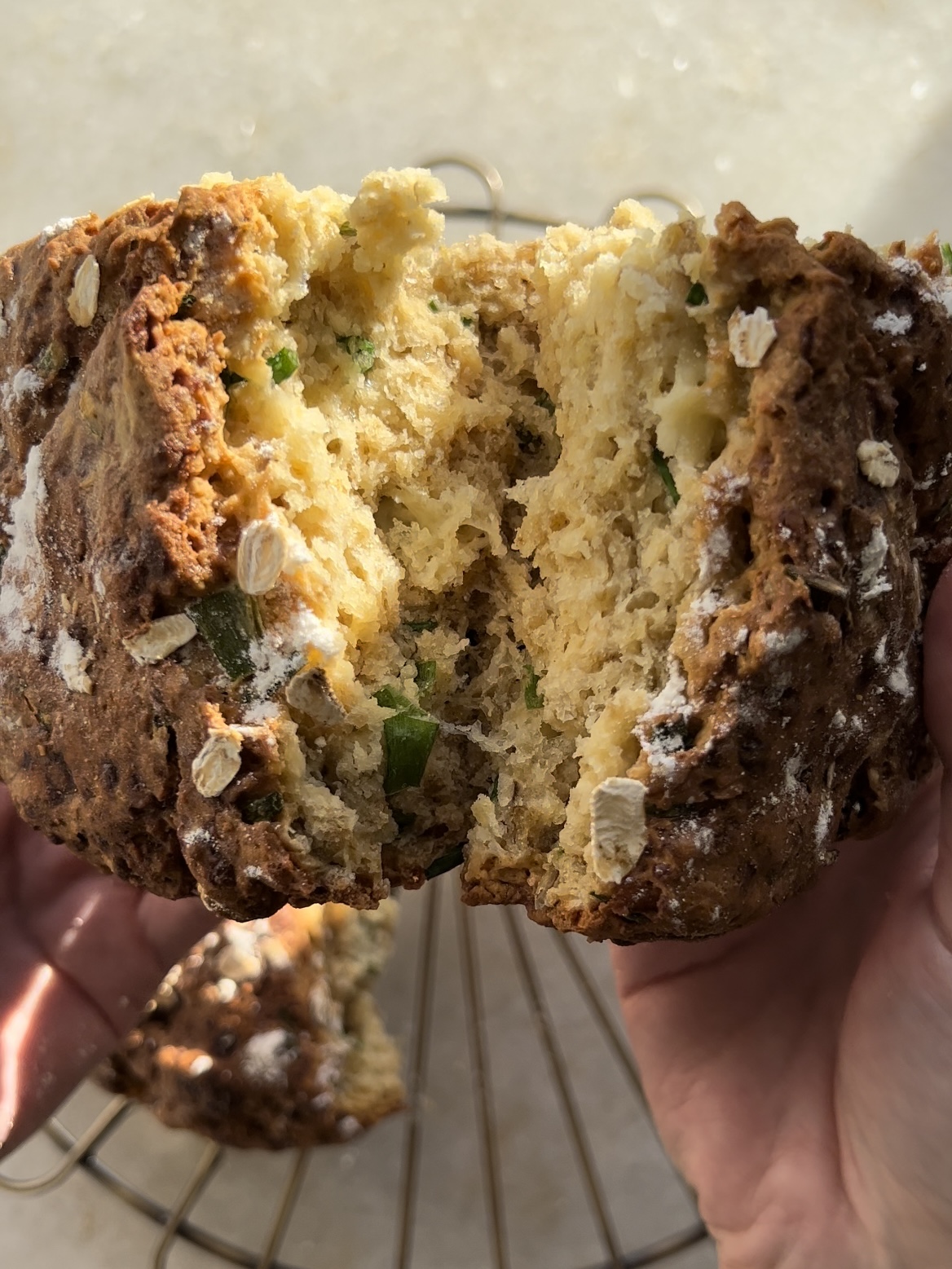 To make the lactose-free buttermilk, combine the whole milk and lemon juice and let sit for 5-10 minutes, or until curdled.

Sift the flour, xanthan gum and bicarbonate of soda into a large bowl and stir through the oats, salt and sugar. Cut the butter into small pieces and rub into the flour mixture with your fingertips, until sandy in texture. Stir through the cheddar cheese, spring onions and herbs.

Mix the egg yolk into the buttermilk and then quickly stir 2/3 of the wet mix into the dry mix, to make a soft dough. Because it’s made with gluten free flour you want the mix to be wetter than a regular soda bread dough, but still able to hold its shape – add more of the wet mix if you think the dough needs it.

Carefully remove the hot baking sheet from the oven and sprinkle a little flour over it. Lightly flour your hands and bring the dough together in the bowl, then turn out onto the baking sheet. Use your hands to form the dough into a circle about 5cm thick (be careful of the hot baking sheet). Use some of the leftover buttermilk to spread over the top of the dough, smoothing down any edges with your fingers. If you don’t have any, you can use water.

Flour a sharp knife and use it to make a deep cross twice on the top of the dough. Sprinkle over a little extra flour and oats.

Bake the bread for 20 minutes, then turn the oven down to 180°C, 160°C fan, gas mark 4 and bake for another 20-25 minutes, or until the bread is golden and slightly risen. To check the loaf is properly cooked, you can tap the base and it should sound hollow.

Transfer the bread to a wire rack and leave to cool slightly before serving. Soda bread is best eaten warm on the day of making, but if you have some left over the next day, it makes for great toast. You can also freeze it, wrapped tightly as a whole loaf or as individual slices.

Taken from my low FODMAP and gluten free ebook, Spring, which you can find more about here! 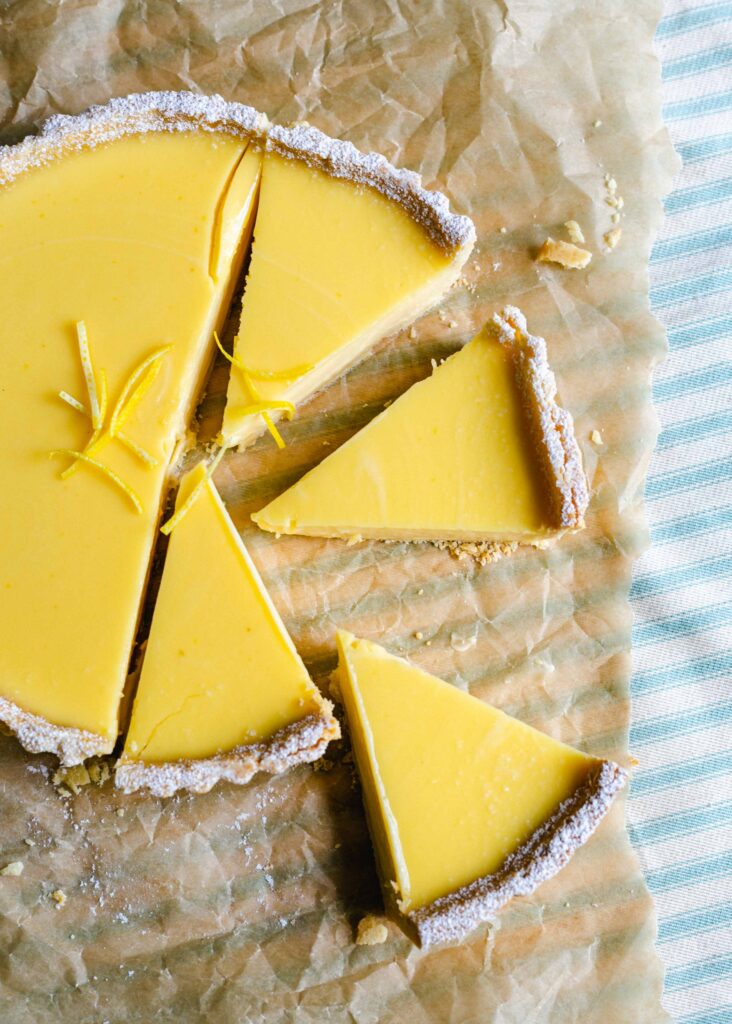 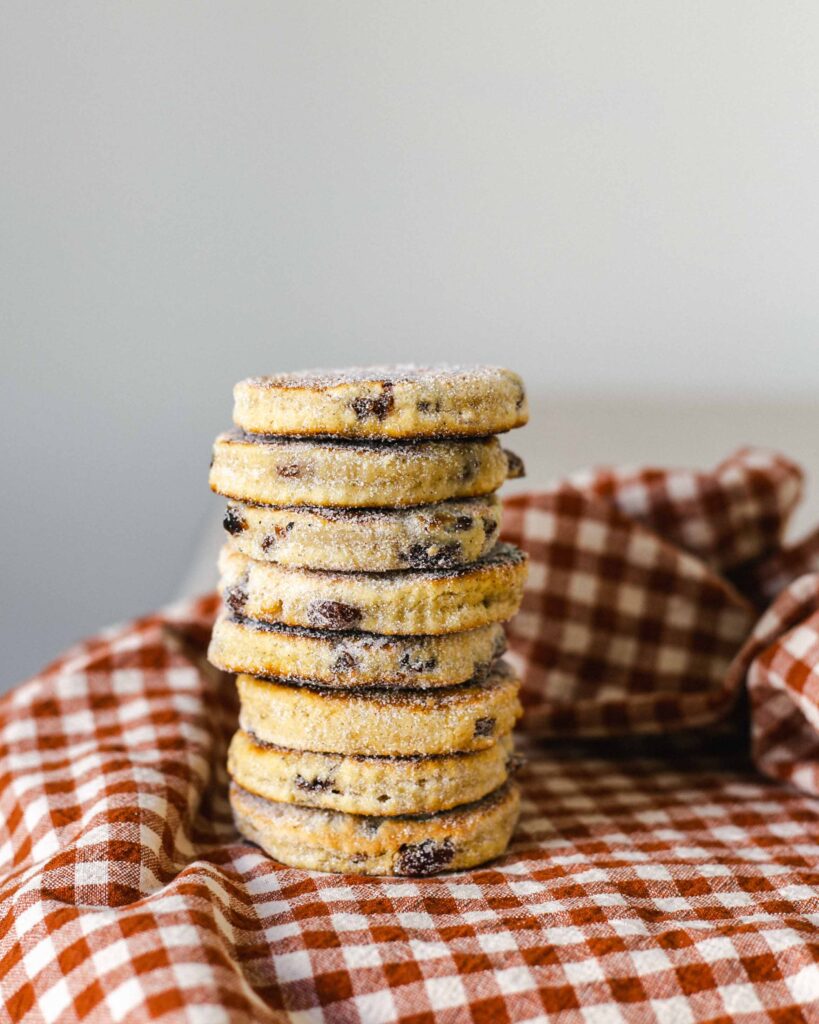 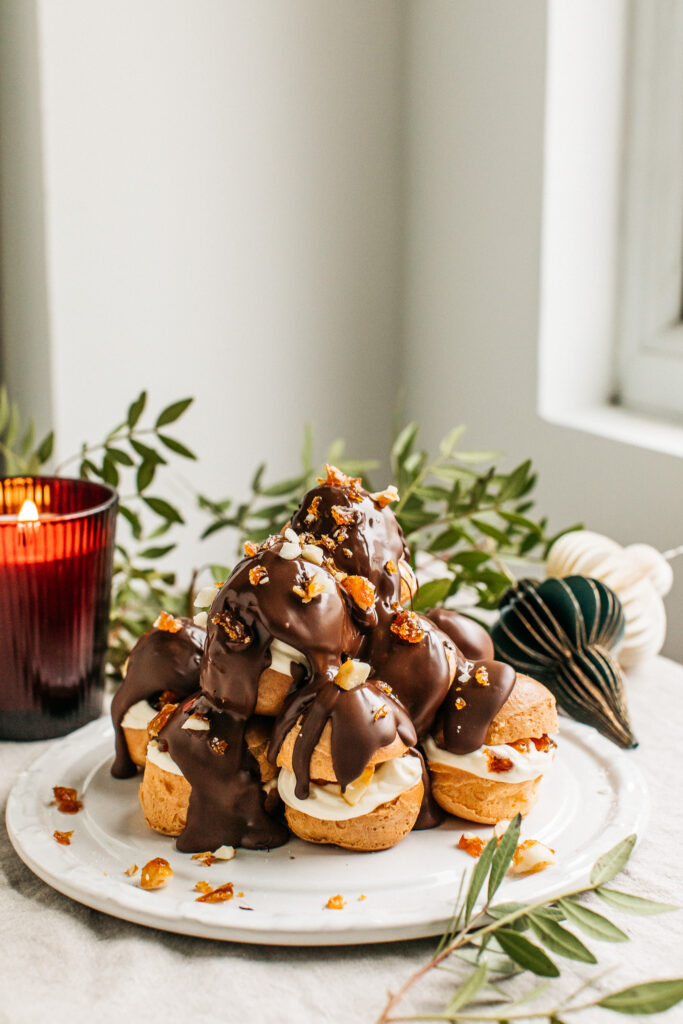